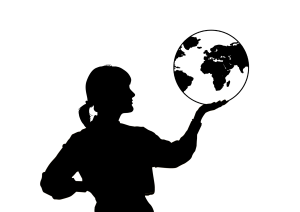 Indians are prone to hero worshipping. This is most apparent in the cult following that film stars inspire. Though politicians are usually regarded with disfavor, a few do have faithful followers.

In a land that revers goddesses, it is perhaps not surprising that many women have managed to occupy top political positions. India has seen many women Chief Ministers. Indira Gandhi was the second woman worldwide, who was voted as head of a nation. (After Sirimavo Bandaranaike, who was the world’s first woman Prime Minister).

Looking back, I see that ‘Mothers’ in public spheres entered my life and have held sway since I moved away from home to study and work.

The first was ‘The Mother’, Mirra Alfassa of Auroville and the Aurobindo Ashram. Nobody who has lived or visited Pondicherry can miss her influence on life and culture in this erstwhile French colony. She was recognized as ‘Supreme Mother’ by none less than her spiritual mentor Sri Aurobindo.

Looking for work, I landed in neighbouring Tamil Nadu (TN).  Just a couple of years after my move, Jayalalitha, a popular film actress became the Chief Minister of TN for the first time.

Since then she was in and out of power. Incumbency is a major factor; and the political parties get voted to power on an alternate basis. Neither Jayalalitha, nor her management of the state was free of controversy. There have been many charges of corruption against her.

However, there is no doubting her popularity among the people, especially women. She targeted women, with election promises from gas stoves, pressure cookers to colour television sets. It was no wonder that she soon began to be called ‘Amma’ or mother by her followers. ‘Amma’ remained popular till the very end. Her sudden death in 2016, plunged Tamil Nadu politics into chaos that it still has to recover from.

Germany, I considered was going to be free of this kind of hero-worship. Partly because westerners visiting India like to mock this as an Indian idiosyncrasy.

People though are not so different wherever they may live. So imagine my surprise, when I found that Angela Merkel, a repeat Chancellor, was called ‘Mutti’ or mother. She seems to have earned herself this title due to her party’s efforts to sell her as a ‘trustable pair of hands’, a simple but solid personality.

Merkel’s ‘Mutti-hood’ was strengthened when she opened the doors to refugees in 2015.

In the latest election, nobody in her party or in the opposition considered anybody else as a chancellor candidate. Opposition from other parties has been compared to adolescents sulking at a mother!

It was that this point that I began to notice that ‘Mothers’  or women in the public sphere had become a prevalent feature in my life.

It is not every woman politician who can claim this title or nickname. There is no doubt that Merkel has been a competent and a strong ruler. So contrast her ‘Mutti-hood’ with that of other strong stateswoman.  Indira Gandhi was the ‘Iron Lady of India’, and Margert Thatcher ‘The Iron Lady of UK’.

Similarly, consider Mamta Banjerjee another popular Indian Chief Minister and a politician reportedly with the greatest mass appeal at present in Bengal. She is neither ‘Ma’ (mother in Bengali) nor Iron Lady. She is the Didi (elder sister) ready to take on Delhi and lead the country. Maybe once that happens she will become Ma of India. Jayalalitha in contrast became Amma early in her career.

Curiously enough both Jayalalitha and Merkel have no children of their own. Even though the land both the women governed have prospered under them, there is not much in common in style or substance with these ‘Mothers’.

Jayalalitha was dodged by charges of corruption and led a lavish lifestyle, while Merkel is well-known for her simple apartment and love for her weekend cottage garden. So what makes one stateswoman, ‘Mother’ and not another? I do not know and it is beside the point.

The point is wherever I decide to live, there is apparently going to be a ‘Mother’ at the helm of affairs.

14 thoughts on “There Is No Getting Away From Mothers”