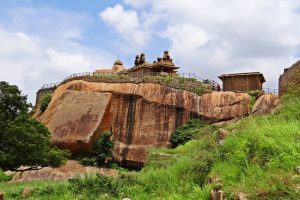 We know loss and degradation of habitats, the capture of animals, and pollution are affecting forests.  What is less known is the role that religion plays in the loss of nature (1).

In the past, temples have harboured and conserved forests as scared grooves. These are vital patches of forests that have survived deforestation for agriculture and settlements for centuries. However, there is an increase in mobility and tourism in India. It brings more and more pilgrims to fragile forests, impacting them in various ways.

Temple authorities often cut down patches of forests to make way for new shrines, or to build concrete dining and resting places. Sometimes it is adventurous pilgrims, who venture into the neighbouring forest growth to picnic. They sweep the forest floor clean of leaves, twigs, and fallen branches that normally form valuable humus and feed the trees. Swept away are also all the seeds that give rise to future generations of plants. As a result ,the forests around the temples start resembling parks.

This is a process one sees in the tropical dry evergreen forests patches along the Coromandel Coast. New shrines start as open air temples with an idol. Then an attendant priest moves in, to earns his income from the new development. With increasing patronage, more and more concretisation occurs. This creates associated ripples of forest degradation.

It is not easy to convince the temple authorities to change. These scared grooves are private temple properties and do not come under the Forest Department.

The fate of forests that do fall under government control is not much better. The Forest officers in Sabarimala are not able to stop littering in the reserved wet rainforests one of the biodiversity hot spots in the world (2).

Salty foods inside plastic bags have proved irresistible to animals, including elephants. The forest department does make an effort to collect litter from the roadside. However, if plastic wrap smeared with food, blows into the surrounding forests, they get eaten by animals, with disastrous consequences.

Times of India has reported that an elephant was found dead near Sabrimala due to vital organs, because the animal had consumed  plastic. Moreover, this is not the first animal that has suffered this fate (3).

There are many sacred temples seated in the middle of forests atop hills and mountains, that pilgrims like to reach on foot (Pada Yatra). Temple authorities give lighting for the convenience and safety of travellers. This light does meet its purpose, by driving animals away from the road. However, for the nocturnal animals, this means their path across this road is cut. Moreover, light pollution is also a form of stress for them (1).

The largest temple in India the Tirumala Tirupati Temple/Devasthanam uses punugu, an aromatic secretion from the small Indian civet to anoint the statue of the deity. To do this, they had earlier held many civet cats captive at the temple to collect and use the secretion. According to Scroll, in 2013, the Forest Department filed a criminal case against the temple for violating the Wildlife Protection Act of 1972, as the act outlaws domestication of wildlife. The court hearing four years later ruled in favour of the temple (4).

This happened at a time when the right-wing Hindu party BJP was ruling at the Centre. Parties and clubs associated with the BJP have murdered people in the pretext of protecting cows. These groups’ passion for nature, unfortunately, is reserved only for cows, not to mention a disregard for human life.

Pilgrimage may well have been the ancient cultural way to get people in India to travel and broaden their horizon. This right cannot be denied to modern Hindus. However, it is necessary to educate people about the consequences of their action, given the change in life styles and use of modern materials.

Some bans against plastic use and other changes in behaviour are vital. People who are on a pilgrimage would be surely open to considering philosophical questions. About their place in the world and nature, and hopefully their responsibility to limit the damage they carry in their wake.

The first necessary step is to create awareness among temple authorities. They have to agree to introduce and carry out measures that protect nature in their care. This could make nature conservation in the day-to-day life of people after the pilgrim also a possibility if people remember lessons learned in temples.

3 thoughts on “Ecological Impact of Temples”